The Chihuahua is the oldest breed on the American continent. The Chihuahua’s history is a puzzling one as there are many theories surrounding their true origin. One theory is that they originated from the Fennec Fox. 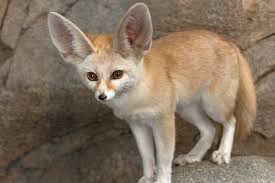 A tiny animal with big eyes and ears. This could explain the petite frame, luminous eyes and large ears the breed has today. The Chihuahua was used in sacred rituals as they were considered holy to Pre-Colombian Indian nations. They were also popular pets to the upper class. The breed draws its name from the Mexican State of Chihuahua, where the first specimens of the breed were discovered.

Some historians believe that the Chihuahua came from the island of Malta in the Mediterranean. Supporters of this theory say a very small dog with a molera (soft spot on the head) became recognized there and journeyed on trading ships through European seaports. More evidence for this theory are European paintings of small dogs who resemble the Chihuahua. One of the most famous paintings is a fresco in the Sistine Chapel by Sandro Botticelli in 1492. 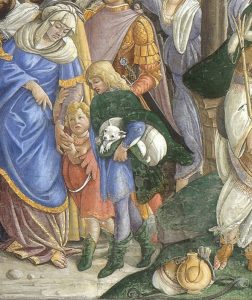 The painting, Scenes from the Life of Moses, shows a woman holding two tiny dogs with round heads, large eyes, big ears, and other characteristics similar to the Chihuahua. The painting was finished ten years before Columbus sailed to the New World, which shows that Botticelli had in no way seen a Mexican dog, yet he depicted an animal strikingly similar to a Chihuahua.

Another theory suggests that the Chihuahua was brought to Mexico from China over 200 years ago. Supporters of this theory believe the Chinese were recognized for dwarfing plants and animals, and when rich Chinese merchants moved to Mexico, they brought Chihuahuas with them. The Aztecs had a little dog named the Techichi, however analysis of the Chihuahua’s mitochondrial DNA suggests that it is of Old World origin, such as from a European toy dog. The mitochondrial DNA analysis only looks at what is inherited from the mother; therefore the fathers of the Chihuahua could have been the Techichi.

When Cortez conquered the Aztec civilization, these little dogs largely were lost. However, in the mid 1800s in the Mexican state of Chihuahua, canine remains thought to be the ancestors of the Chihuahua were discovered in ruins of an emperor’s palace. Archaeoligists have discovered countless remains of tiny dogs thought to be predecessors of the Chihuahua throughout Mexico, often in human graves. Apparently early fanciers of the breed believed that upon cremation and burial of both dog and owner, the sins of the human would be transferred to the dog, and the wrath of the deity would be averted. Chihuahuas were thought to guide the human soul through the underworld into the afterlife, fighting off evil spirits. These legends are a rich part of the history of this breed, regardless of whether or not they are true